U.S. car company Ford Motors announced it will soon unveil what it’s calling the “first-of-its-kind sun-powered vehicle.”
The C-MAX Solar Energi Concept could run, the company said, “without depending on the electric grid for fuel.”

Ford says the car harnesses the power of the sun by using a special concentrator that acts like a magnifying glass, directing intense rays to solar panels on the vehicle roof.

A day’s worth of sunlight could give the same performance as a plug-in hybrid, the company said, adding that driving the car would reduce the annual greenhouse emissions a typical owner would produce by four metric tons — the equivalent of what a U.S. house produces in four months. 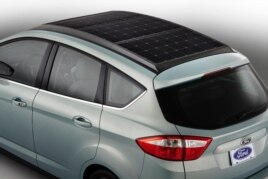 Ford says a sunlight concentrator on the roof could make the car practical for every day use.

SunPower, which has been Ford’s solar technology partner since 2011, is providing the solar cells for the roof of the car. Because of the extended time it takes to absorb enough energy to fully charge the vehicle, Ford turned to Georgia Institute of Technology for a way to amplify the sunlight in order to make a solar-powered hybrid feasible for daily use.

After the event, Ford and Georgia Tech will begin testing the vehicle in numerous real-world scenarios to see if the concept is feasible for mass production.